This post attempts to explore how split sheets work in sound recordings. It is a follow up to a previous post titled Split Sheet Meaning In Music.
We’ve explained that music split sheets are necessary to clarify percentage ownership in songs. This is necessary to prevent disputes and allow for fair distribution of royalties.
As a reminder, split sheets are completed by songwriters. When we read into US Copyright Law, we see that songwriters are considered to be individuals who have written musical compositions.
Copyright.gov (2019) explains that a musical composition consists of MUSIC AND ANY ACCOMPANYING WORDS.
A musical composition can be produced in two ways:
a. in the form of a notated copy such as sheet music.
b. or in the form of a phonorecord (for example,
cassette tape, LP, or CD).
Therefore, for the purpose of split sheets and also copyrighting, the term SONGWRITER OR SONGWRITERS should refer to:
– lyric writers – commonly called songwriters.
– persons or writers who produce the notated music, melody, harmony, arrangements, beats to accompany the lyric (ASCAP, 2020).

Is a sound recording the same as a phonorecord

What is a sound recording under US Copyright Law?

Who are the authors of a sound recording under US Copyright Law?

Possible application of the law

What if the music producer produced the sound to accompany song lyrics that were written by another party?

My viewpoint on this matter refers to contracts between entities outside of a “work made for hire” agreement.
in my view, if a lyric writer takes a song to a producer for the addition of sound, then that producer becomes a songwriter or collaborator for the musical composition. He or she would then be entitled to a percentage of the royalties to be assigned to the musical composition.
This is my view, satisfies the definition of a musical composition according to US Law.
Disclaimer, I am not a lawyer and recommend that you satisfy all legal requirements related to the interpretation of the law. 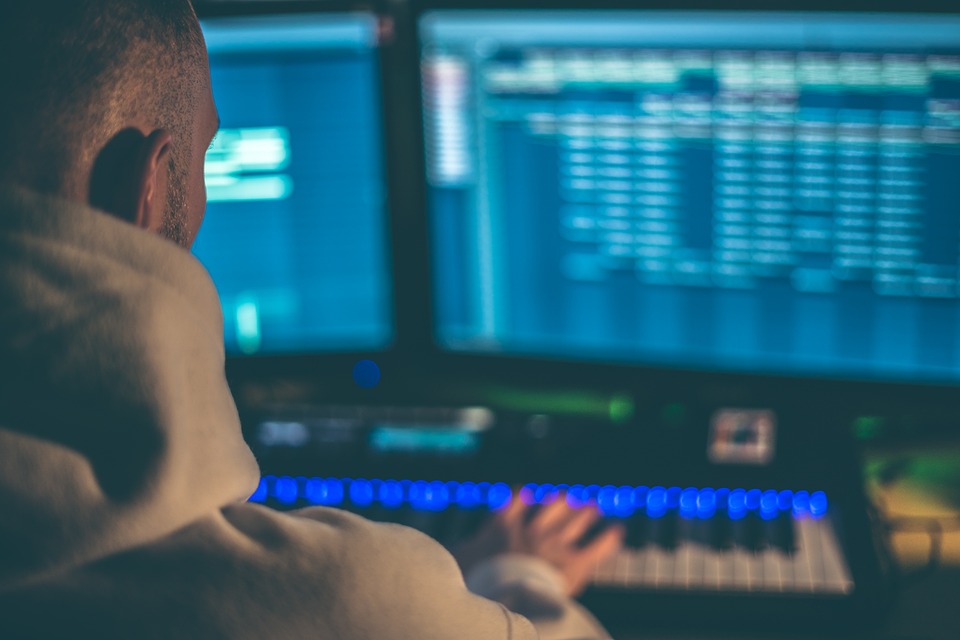 Do producers get songwriting credits?

Music producers are also known as record producers and track producers. The role is related to the sound recording of a musical composition.
The scope of the job of a music producer varies widely and encompasses:
– Recording
– Mixing
– Mastering
– Creative input – what does this entail?
– Problem-solving
– Technical innovation
– Communication (The Balance Careers, 2021)
Wikipedia, (2021) explains that three specialties may be involved in the creation of a music recording:
a. Executive producer – business partnerships and financing.
b. Vocal producer/arranger – coaching and critique of vocal technique.
c. Record producer or music producer or producer – directs the overall creative process of the song recording in its final mix.

A Music producer job description sample on Monster.com shows that producers could be involved in rewriting lyrics. This specific music producer job descriptions states that he or she:
Arranges compositions, runs recording sessions, and suggests changes to instrumentation, effects, and lyrics.
In my understanding, a new version or derivative of the song could be produced if the producer rewrites the lyrics and/or melody. This should obviously be done with the consent of copyright owners and preferably in collaboration with them.
It seems, therefore, that the producer would become a copyright owner to the derivative if changes are made. This would have implications for the registration of new copyright of the derivative and performance royalty assignments to the producer.
Another example is one in which a radio version of the song is produced which results in a new derivative. In this instance, the contractual arrangements should reflect the necessary elements related to songwriting ownerships of this copy.

To summarize, this is my interpretation of the US Copyright laws that are applicable to the payment of music producers for sound recordings. Nations that have signed on to the International Copyright Laws may have similar laws.
Here are three possible ways for payments of music producers for their work related to music:
1. Work for hire
The producer is hired to generate a sound recording. In this situation, there is existing and complete music composition. The lyrics and music notations or music is complete and there is no need to edit.
The producer is paid fees related to work for hire, according to US Copyright law.
The common practice in the industry is to pay a flat work for hire fee plus a percentage of royalties, possibly to acknowledge authorship of the recording.
2. Paid as the author of the sound recording.
The music producer is paid out royalty shares as the author of the sound recording, according to US Law. Splits are made between the music producer and artist.
3. Paid royalties as songwriters or collaborators
This situation applies when the:
– producer is required by contract to edit the musical composition and to add new lyrics and or music, thus creating a derivative work.
– add all or part of the sound to accompany the lyrics.

I recommend that the law should expand the definition or explanation of the term music composers to allow for the fair assignment of royalty fees regardless of music genre.
The concept of “work for hire: is somewhat fuzzy under the law as it seems to address producers working with an employer, such as a record label, etc. It does not seem to address situations outside of that type of arrangement. Further clarity is needed in my opinion to allow for ease of application and fair payment in the application of the law.
There may be less formal situations in which a music band composes the sound to accompany the lyrics, How would they be paid?

I found songsplits.com which is an online database for registering song splits. It does not contain all of the Performing Rights Organizations, but might be useful to readers.
Free split sheet template

Do you hold to the views in this Marley Mac Video?

https://www.youtube.com/watch?v=X9oF6y6tdy8
Still to bravely be written
Do producers get paid more than artists?
How much can a producer make on a hit song?
Who makes the most money from a song?
How much does a songwriter make for a #1 hit?
How much money do beat makers make?
Do songwriters make a lot of money?
RESOURCES
Copyright Registration for Sound Recordings
Music Law Resource Guide – Hofstra University.
Job profile – music producer.
U.S. Copyright Office: Sound Recordings as Works Made for Hire